The Water Reclamation Plant treats wastewater for the city’s residents, industries, and frequent visitors.  The original facility was built in 1926 and was one of the first wastewater treatment plants to operate in Minnesota. The facility continually undergoes change to comply with effluent regulations and meet the needs of the growing Rochester community.  The Water Reclamation Plant is located at 37th Street and West River Parkway. 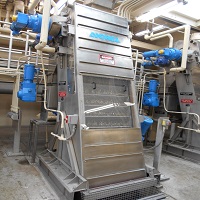 65 feet to the headworks for preliminary treatment. This is the only time the liquid stream is pumped, and hence fourth will gravity flow through all the remaining processes. The first process encountered is the fine screens that allow liquids to pass through while catching any debris larger than 6 mm.  After the screens, a vortex grit unit removes grit, sand, and heavier particulates. Flow is then directed to the HPO Plant, the ABC Plant, or the equalization basin. Equalization is a storage tank that allows flow to be stored during high flow periods and released during low flows reducing strain on the plant.

Primary Clarification: Primary clarification is used to separate out solids that will fall out of suspension when flow velocity is reduced. Solids are collected at the bottom of the tank and sent to the solids treatment portion of the plant. Approximately 50% of total suspended solids and 40% of organics are removed in primary clarification.

Both the HPO and ABC plants use an activated sludge process which uses biological growth to remove pollutants that otherwise would be extremely difficult to remove by chemical or physical means. The general concept is the same between the two plants however there are some differences, primarily that the HPO plant uses high purity oxygen (92% oxygen) to meet the aeration requirements of the microorganisms. The HPO plant is also broken into two stages, the first being for organic removal and the second being for ammonia removal. ABC plant removes the same pollutants but use conventional air (21% oxygen) and removes organics and ammonia in the same tank.

Advanced Treatment: The Rochester Water Reclamation Plant uses several advanced treatment technologies including biological nutrient removal. Both plants perform nitrification and the ABC plant has the ability for denitrification (or the conversion of nitrates to nitrogen gas) and biological phosphorous removal. Both plants inject ferric chloride into the primary clarifiers and have the ability to inject alum into the final clarifiers to assist in precipitation of phosphorous.

ween April and October, chlorine is added to the treated wastewater to kill most remaining microorganisms from the activated sludge that weren't captured in the clarifiers. This protects any people or animals that come in contact with the reclaimed water after it is released to the Zumbro River. Sodium bisulfite is used to neutralize any residual chlorine to prevent any negative impacts to downstream aquatic life.  The reclaimed water is also aerated during conveyance to the river to increase dissolved oxygen levels for aquatic life.

Solids Processing: Waste activated sludge from both stages in 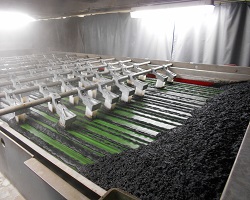 the HPO plant and the ABC plant are thickened on the gravity belt thickeners (GBT's) prior to being combined with primary sludge. Blended sludge is anaerobically digested in single stage digester with a detention time of approximately 30 days that produces a methane rich gas byproduct. The digested sludge is thickened using GBT's to reduce the volume before being stored and ultimately being land applied seasonally.